Solar eclipses are rare enough that there is not a lot of music on such a specific topic even though total solar eclipses have always captivated our attention. However, we have put together some playlists that remind us of this inspiring phenomenon of nature. Enjoy!

Innovative Music and Sonification: One way to make eclipse music is to take the data from the eclipse and through the magic of software perform a procedure called ‘sonification’. For the August 21, 2017 event, the Kronos String Quartet will accompany the sonification process and turn the entire eclipse into a spectacular sonic experience. Here is a description of this process and what to expect.

Contemporary music: You may already have several of the following tunes on your Playlist. Only two songs actually mention the phenomenon by name (Simon and Pink Floyd). 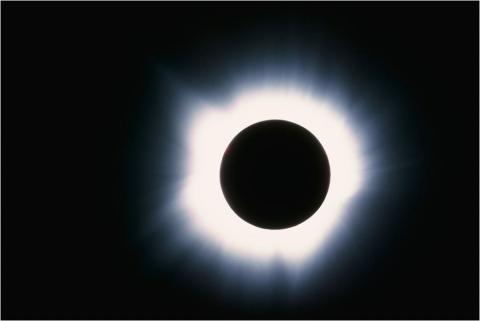 ‘You’re so Vain ‘ sung by Carly Simon
. . . you flew your Lear jet up to Nova Scotia
To see a total eclipse of the sun

Her lyric refers to the March 7, 1970 total solar eclipse, and this is the only known recorded song that mentions a specific eclipse. This will make future historians very happy if they try to date when the song was written if no other records exist. This is kind of like what archaeologists do with Babylonian cuneiform eclipse records today. By the way, there was a later ‘Nova Scotia’ eclipse on July 10, 1972, but Simon’s song came out in 1971. Time travel had not been invented yet.

‘Eclipse’ by Pink Floyd from ‘Dark side of the Moon’
… and everything under the sun is in tune
but the sun is eclipsed by the moon.

‘Total Eclipse of the Heart’ sung by Bonnie Tyler.
…Once upon a time there was light in my life
But now there's only love in the dark
Nothing I can say
A total eclipse of the heart…

Older Music from Long Ago!

If we go farther back in time before many of us were born, we come across a smattering of sheet music published in the 1800s and early-1900s. 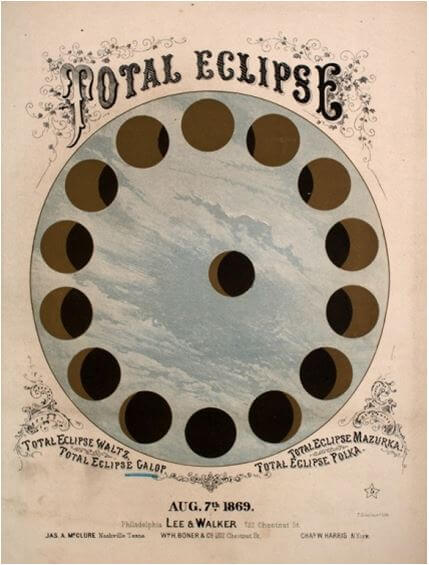 ‘The Total Eclipse Gallop’ composed by E. Mack and published in 1919 by Lee & Walker. Commemorates the August 7, 1869 total solar eclipse, which was visible across the continental United States.
https://jscholarship.library.jhu.edu/handle/1774.2/21528

Other memorable dance tunes that are now long forgotten include:

For more about music and the sun, visit the Stanford Solar Center’s solar music webpage (http://solar-center.stanford.edu/art/music.html), where you will hear scientific data rendered into musical sounds!