The earliest writings we have showing that people paid attention to eclipses in any official way are around 5,000 years old. 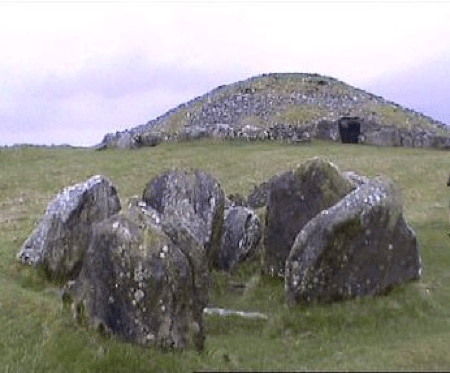 In 1999, Irish Archeoastronomer Paul Griffin investigated the Loughcrew Cairn L Megalithic Monument in Ireland, and discovered that a set of spiral-shaped petroglyphs that might correspond to a solar eclipse which occurred on November 30, 3340 BCE. The symbols display a consistent coding of the sun, moon and horizon, and of the 92 tracks of total solar eclipses, only the one for 3340 BCE visible at this site displayed the same geometric relationships.

Ancient Chinese Records — in particular, the Shu Ching—of the solar eclipse that occurred (most likely) on 22

October 2134 B.C.E. include a passage that translates in English to “the Sun and Moon did not meet harmoniously.

In Ancient China, solar and lunar eclipses were regarded as heavenly signs that foretold the future of the Emperor. The ancient Chinese believed that solar eclipses occur when a celestial dragon devours the sun. They also believed that this dragon attacks the Moon during lunar eclipses. In the Chinese language, the term for eclipse was "shi" which also means "to eat".

One ancient Chinese solar eclipse record describes a solar eclipse as "the sun has been eaten". It was a tradition in ancient China to bang drums and pots and make loud noise during eclipses to frighten the dragon away. The Chinese Imperial Emperor Chung K’ang (B.C.E. 2159 – 2146) learned of an eclipse when he heard much noise in the streets as his subjects tried to drive away the dragon that was eating the sun. They were successful, but the Emperor’s two court astronomers, Hsi and Ho, were reportedly beheaded for failing to predict the event. 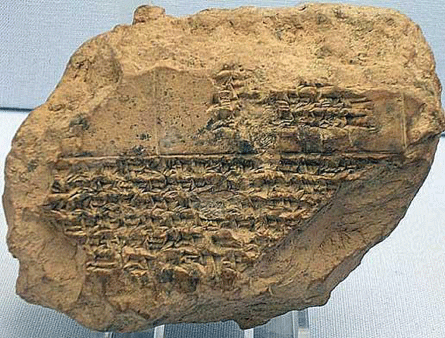 Babylonian Clay Tablets such as the one below, provide physical records of ancient eclipses viewed by humans, in this instance between 518 and 465 BCE. Babylonian astrologers kept careful records of celestial events including the motions of Mercury, Venus, the sun, and the moon on tablets dating from 1700 to 1681 BCE. Later records identified a total solar eclipse on July 31, 1063 BCE, that "turned day into night," and the famous eclipse of June 15, 763 BCE, recorded by Assyrian observers in Nineveh. By carefully noting local lunar and solar eclipses, Babylonian astronomers were able to predict lunar eclipses and later, solar eclipses, with a fair accuracy. Their tool was the so-called Saros-cycle: this is the period of 223 synodic months (or 18 years and 11.3 days) after which lunar and solar eclipses repeat themselves. Ref: http://sunearthday.nasa.gov/2006/locations/babylon.php

There are many stories of how eclipses have been used to foretell important political events, and for nearly all human civilizations with a recorded history, total solar eclipses were regarded with fear and dread prior to the advent of mathematical schemes for predicting when they would occur.

The Ancient Greeks also recorded eclipse events. The poet Archilochus spoke of the total solar eclipse of 6 April 647 B.C.E. in mythic terms:
“There is nothing beyond hope, nothing that can be sworn impossible, nothing wonderful, since Zeus, father of the Olympians, made night from mid-day, hiding the light of the shining Sun, and sore fear came upon men.”

Around 460 BCE, the Greek historian, Herodotus wrote that Thales was able to predict the year when a total solar eclipse would occur. Details of how this prediction was made did not survive. The eclipse occurred in either 610 BCE or 585 BCE. Apparently the method used worked only once because what is known of Greek scientific history does not suggest that the method was ever reliably used again. Thales is said to have visited Egypt, and from the empirical rules in use there for land surveying, brought back to Greece the ideas of deductive geometry later codified by Euclid. Before 450 BCE, Meton realized that a single period of 235 lunar months (19 years) would cause the popular lunar calendar to return to synchrony with the solar, seasonal calendar.

At this time, the same lunar phase would be recorded at the same time of the solar calendar year. This period also gives a rough guide to when a lunar eclipse will recur at the same geographic location.

The famous Greek astronomer, Ptolemy (ca 150 CE) recorded his observations of eclipses in the Almagest and showed he had a sophisticated scheme for predicting both lunar and solar eclipses. Ptolemy knew, for example, the details of the orbit of the Moon including its nodal points.

He also knew that the sun must be within 20 degrees 41' of the node point for an eclipse to occur. From this information, Ptolemy figured that up to two solar eclipses could occur within seven months in the same part of the world. Lunar eclipses were especially easy to calculate because of the vast area covered by Earth's shadow on the Moon. Solar eclipses however required much greater knowledge.

So by the Second Century CE, total solar eclipses could be predicted with some reasonable accuracy. For a growing segment of the human population they were no longer messages from hostile gods or supernatural forces, but simply an interesting regularity of the orbits of the Moon and Earth about the Sun. 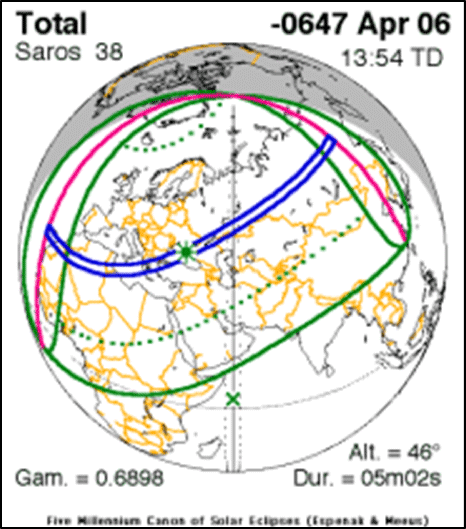 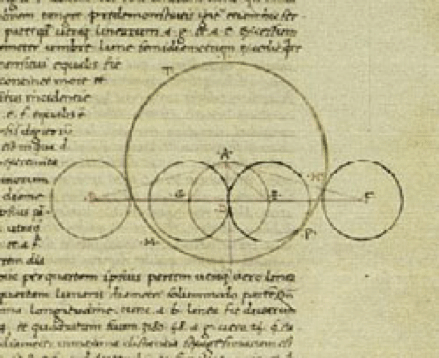 More Recent Accounts come to us, as well, through numerous writings about eclipses through the ages. The British poet John Milton writes in Paradise Lost;

"As when the Sun, new risen, Looks through the horizontal misty air, Shorn of his beams, or from behind the Moon, In dim eclipse, disastrous twilight sheds On half the nations and with fear of change Perplexes monarchs."

Solar eclipses were by all accounts events of wondrous and magical proportions. Today, of course, we understand eclipses very well. We know how and why they happen, and when and where they happen. We have seen eclipses from space. We have even used eclipses to probe the laws of physics and to discover new worlds outside the Solar System. Still, eclipses of the sun hold their ancient magic and are fascinating to watch.

Many Scientific Discoveries have been made during solar eclipses. The moon’s unique ability to cover the sun’s disk has allowed investigations of the corona and chromosphere as well as verification of the theory of General Relativity. The following table lists some of these important scientific discoveries. A more complete listing of important solar eclipses in history can be found at https://eclipse.gsfc.nasa.gov/SEhistory/SEhistory.html 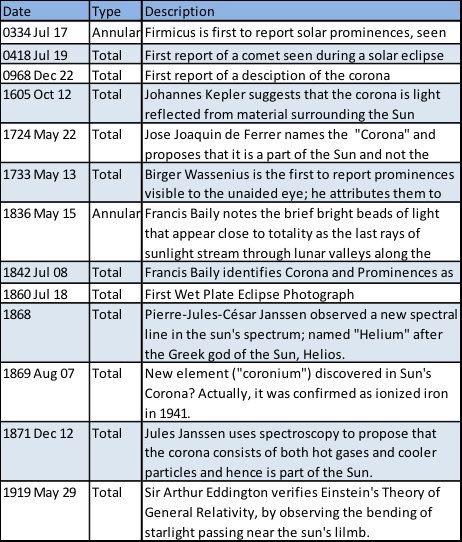 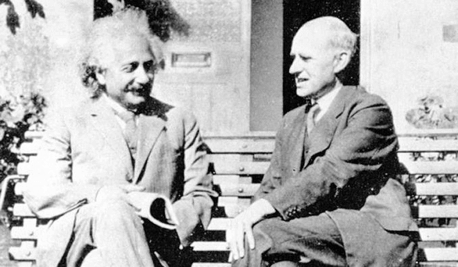 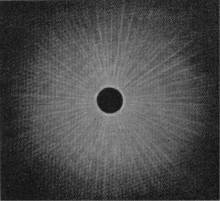 We don’t really know how long humans have noticed the spectacular corona of our sun, but it seems likely we have admired it for as long as humans have existed. The first western description of the corona during a total solar eclipse was probably that of Lucien in 932 BCE "… a kind of light is visible about the rim which keeps the shadow [of the moon] from being profound and absolute." Some ancient petroglyphs and other primitive art seem to suggest a sun disk with ‘protrusions’ of one kind or another, but we can’t be certain of this interpretation. 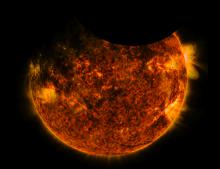 Early in the morning of Sept. 1, 2016, NASA’s Solar Dynamics Observatory, or SDO, caught both Earth and the moon crossing in front of the sun. SDO keeps a constant eye on the sun, but during SDO’s semiannual eclipse seasons, Earth briefly blocks SDO’s line of sight each day – a consequence of SDO’s geosynchronous orbit. On Sept. 1, Earth completely eclipsed the sun from SDO’s perspective just as the moon began its journey across the face of the sun. 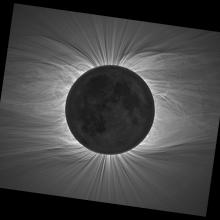 The High Altitude Observatory of the National Center for Atmospheric Research provides an archive of research-quality images of solar eclipses as far back as 1869.

How did people talk about eclipses long ago? Check out this collection of newspaper articles from 1800-1930 for a glimpse of eclipse stories before the Internet Age.Here are some examples of the eclipse stories published in a variety of American newspapers and magazines between 1800-1930.

History Along the Track

The path of the August 21, 2017 total solar eclipse has been crossed by the tracks of 15 previous eclipses over the continental United States between 1503 and 1970.

Solar eclipses are rare enough that you aren’t going to find a whole lot of music on such a specific topic! This is actually an odd thing because total solar eclipses have always captivated our attention, but perhaps they just aren’t the sort of thing that you want to sing about if you are worried about the End of the World!