Eclipses, whether solar or lunar, occur because of the periodic alignments of the sun, Earth, and moon. These three bodies, orbit in space in very predictable paths (yes, the sun orbits too. It orbits the galaxy once every 200 million years!). Ever since the days of Kepler and Newton, we have been able to predict the motion of planetary bodies with great precision. So, why do eclipses happen?

The Moon moves right to left in its orbit around the Earth. The shadow it casts hits the Earth during the August 21, 2017 total solar eclipse.

Solar Eclipses Happen when the moon moves between Earth and the sun. You might think that this should happen every month since the moon’s orbit, depending on how it is defined is between about 27 and 29 days long. But our moon’s orbit is tilted with respect to Earth’s orbit around the sun by about five degrees. Not much, you say? Yes, but the moon, itself, is only about ½ degree in width in the sky, about ½ the width of your pinky finger held at arm’s length. So, sometimes the moon misses too high and sometimes too low to cause a solar eclipse. Only when the sun, moon, and Earth line up close to the “line of nodes”, the imaginary line that represents the intersection of the orbital planes of the moon and Earth, can you have an eclipse.

The Moon orbits the Earth in the months prior to the August 21, 2017 total solar eclipse. Viewed from above, the Moon's shadow appears to cross the Earth every month, but a side view reveals the five-degree tilt of the Moon's orbit. Its shadow only hits the Earth when the line of nodes, the fulcrum of its orbital tilt, is pointed toward the Sun.

This is true for both solar and lunar eclipses. This situation is somewhat unique as no other moon in the solar system orbits roughly in the plane of the “ecliptic”, Earth’s orbital plane, that the planets more or less follow. 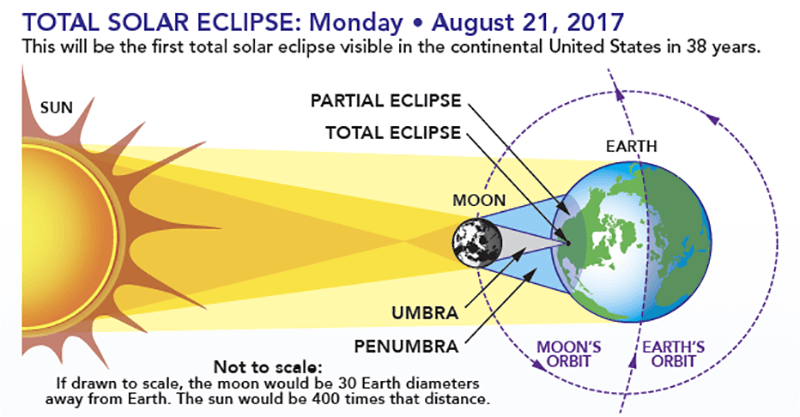 There are Four Types of Eclipses

Depending on your location and on the specific geometry of the sun-Earth-moon system, you may experience one of four types of solar eclipses; total, partial, annular and hybrid.

A TOTAL ECLIPSE happens when the moon completely covers the sun. Here, the observer is standing under the umbral shadow of the moon. In a total solar eclipse, the sun’s outer atmosphere can be seen. 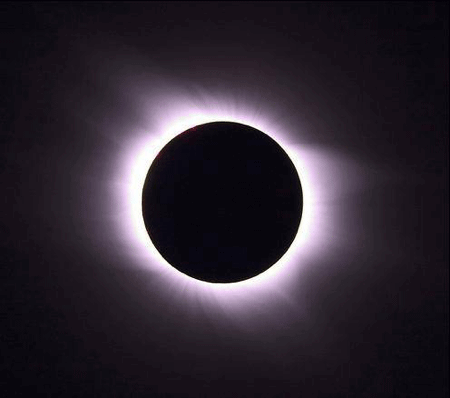 This image shows the Aug. 1, 2008, solar eclipse at the point of totality, when the moon completely blocks out the body of the sun, revealing the normally hidden, halo-like corona. Image Credit: The Exploratorium

The brighter stars and the planets come out. Animals change their behavior. Birds and squirrels nest. Cows return to the barn. Crickets chirp. There is a noticeable drop in both light level and air temperature. It is an eerie feeling. Totality can last for no more than about seven and a half minutes but is usually less than three minutes long.

A PARTIAL ECLIPSE occurs when the moon passes in front of the sun, off center and only a portion of the sun’s disk is obscured. Here, the observer is standing in the penumbral shadow of the moon. 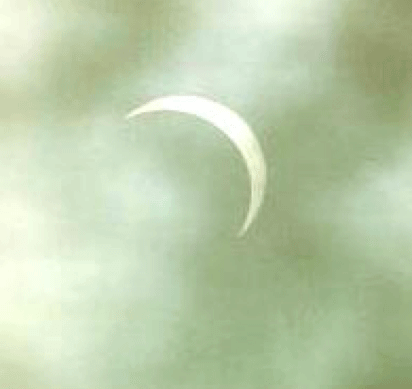 AN ANNULAR ECLIPSE occurs when the moon passes dead center in front of the sun but, because the moon’s orbit is elliptical and so is sometimes closer and sometimes further from Earth, it appears too small to fully cover the disk of the sun. 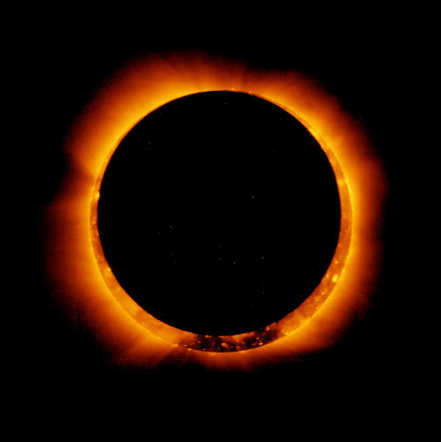 Image of an annular solar eclipse as seen from the Japanese Hinode Satellite. Image Credit: Hinode/XRT

Here, a bright ring called the “ring of fire” appears around the dark disk of the moon. In an annular eclipse, the moon’s umbral shadow comes to focus – to a point – above the Earth’s surface.

A HYBRID ECLIPSE is a combination of total and annular eclipses. The eclipse begins as one type and ends as another.