These mysterious bands of shadow race across the landscape in the seconds before totality. Scientists still don’t fully understand what they are. You can study them yourselves by taking measurements and photographs and come up with your own hypothesis.

Shadow bands are thin wavy lines of alternating light and dark that can be seen moving and undulating in parallel on plain-coloured surfaces immediately before and after a total solar eclipse. Shadow bands have been noted throughout history.

In the 9th century CE, shadow bands during a total solar eclipse are described for the first time-in the Völuspá, part of the old Icelandic poetic edda. Hermann Goldschmidt of Germany notes shadow bands in 1820 visible just before and after totality at some eclipses. George B. Airy, the English astronomer royal, saw his first total eclipse of the sun in 1842. He recalled shadow bands as one of the highlights: "As the totality approached, a strange fluctuation of light was seen upon the walls and the ground, so striking that in some places children ran after it and tried to catch it with their hands" 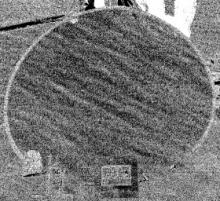 The photo above was taken by Franz Kerchbaum at the Institute for Astrophysics at the University of Wien in Austria. It is very difficult to photograph these moving and very faint bands, but if you have a large 3x3-foot piece of white paper and a proper camera setting, even your cell phone may produce good-quality images! Franz's other images taken during the 2006 eclipse in Sallum, Egypt can be found at https://homepage.univie.ac.at/franz.kerschbaum/eclipse.html

Today we even have videos of this phenomenon from recent eclipses. This video captured with an iPhone clearly shows the elusive shadow bands. When conditions are right, these delicate shadow bands may appear just before and just after a total solar eclipse. https://www.youtube.com/watch?v=f_XMnU7Ad40

Many ideas have been proposed to explain them over the last 100 years, but since 1925 most investigators favor an atmospheric origin. Many eclipses have been investigated for their causes related to the astronomical geometry of eclipses. Because shadow bands are unpredictable from eclipse to eclipse, there does not seem to be a firm connection with the relatively fixed circumstances of an eclipse. Instead, the intensity, motion and direction of these bands seems to be related to the same phenomenon that makes stars twinkle. In the upper atmosphere there are turbulent cells of air that act like lenses to focus and de-focus the sharp-edged light from the solar surface just before totality. The movement of these atmospheric cells is random between each eclipse and each viewing location, so the appearance and movement of shadow bands cannot be predicted beforehand.

What you can do?

There is still not enough data about shadow bands to explore their origins completely. Because they are a phenomenon of light and motion, and they only last less than a minute before and after the slim crescent of the solar surface appears and vanishes, using video cameras or rapid still photography is the best way to capture their fleeting images. A large 1-meter square piece of white paper or poster board is essential. Use this as the screen and set up your camera to photograph or record continuous video of this screen as the crescent of the solar surface disappears at the start if the eclipse, and re-appears at the end of the eclipse. Place your digital camera in ‘sports photography’ movie mode so that when you depress the button your camera will take a continuous stream of still images. Make sure a meter stick is placed on the screen so that you can establish size. Also make sure that your pictures or video are time stamped so you can determine their speed, and changes in intensity and direction. Also on the screen, draw a line pointed in the direction of the eclipsing sun during totality, and a line directed North-South and East-West.

Here are some sample questions to investigate.

Do the shadow bands move in the same direction across your viewing area?

Do they move parallel or perpendicular to the direction towards the sun?

Do they follow the geographic direction of local or prevailing winds?

Do they maintain the same speed?

What is the distance between the bands as they move?

How does the intensity of the bands change during the eclipse?

Do they travel in groups and if so what is the diameter of the group size?