History Along the Track

The path of the August 21, 2017 total solar eclipse has been crossed by the tracks of 15 previous eclipses over the continental United States between 1503 and 1970. This means that by standing on these various intersection points in space, we can imagine ourselves taking a hop-skotch of steps back in time to explore the history of this continent. What follows is a mere hint of the richness of history during the indicated years. Can you create your own historical guidebook to these periods? 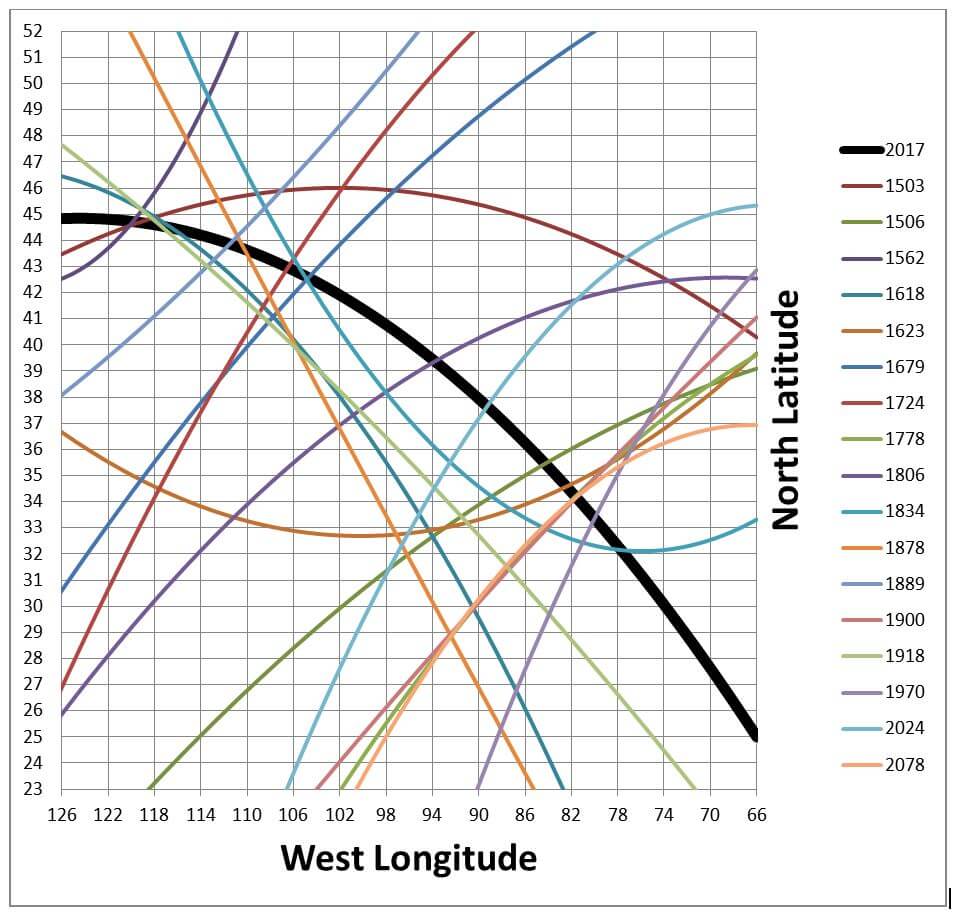 1503 – This eclipse finds us in Oregon populated by the Umatilla and Northern Paiute Nations among over 100 other Native American tribes. Christopher Columbus had just discovered the Cayman Islands, calling them Las Tortugas. Meanwhile, Juan de la Cosa had published the first map showing the Americas. Also by this time, Gaspar Corte-Real makes the first known landing in North America by a Western European explorer this millennium. There had, as yet not been a single visit by Westerners to the vicinity of Oregon.

1506 – We are now standing in Cherokee Territory, which would eventually be called Tennessee. The Southern Indians, who include the Seminoles, Creeks, Choctaws, Chickasaws and others, lived in what we now call the Deep South. By the 1500s, a "Creek Confederacy" hasd been established. Native Americans lived in thatched huts and were farmers and raised livestock. On February 29, 1504, Christopher Columbus impressed natives in Jamaica by using a lunar eclipse to get them to provide food and shelter. This is around the time that Nicolas Copernicus began to write De Revolutionibus Orbium Coelestium, which announced the heliocentric model. 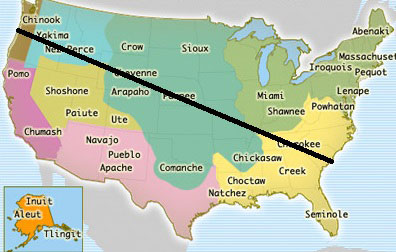 Path of 2017 eclipse across Native American (Adapted from "United States History Map" and used with permission by Annenberg Learner, www.learner.org

1562 – We are now back in Oregon. Western explorers finally made repeated journeys up the Pacific Coast to the Oregon area, in many cases seeking the Northwest Passage, and later over land, but missed many areas of the state now known as Oregon. Fur traders and trappers, initially from the Hudson's Bay Company, explored the land more thoroughly, documenting encounters with most of the local Native American tribes. Juan Rodríguez Cabrillo sighted southern Oregon off the Pacific coast in 1543. In 1592, Juan de Fuca undertook detailed mapping and studies of ocean currents. Stops along these trips included Oregon as well as the strait now bearing his name. 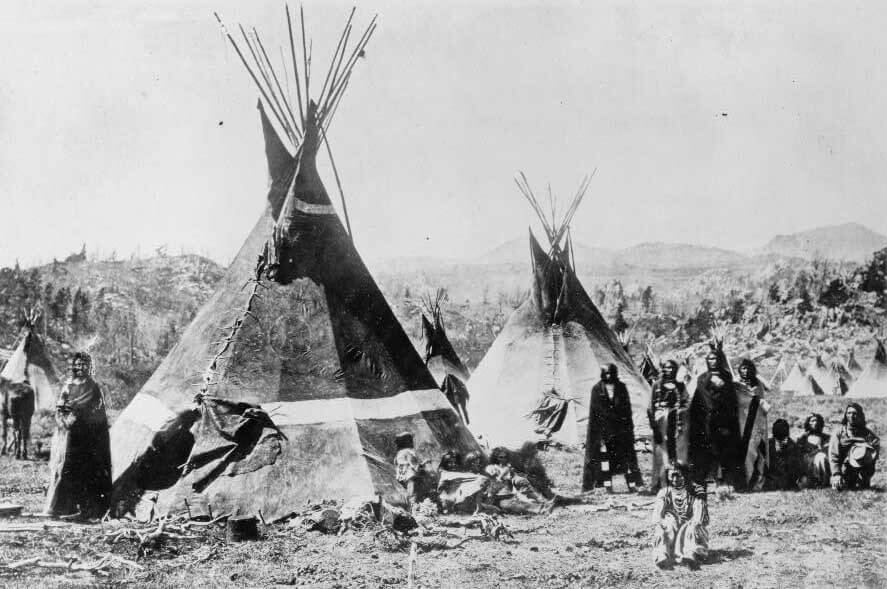 1618 – This eclipse finds us in Idaho in the midst of the Shoshone Nation. The colony of Jamestown, Virginia had been founded in May 1607 by the colonists of the London Company, but did not survive. A small pox epidemic in New England decimated the Native American populations in that region within a few years. Back in the Old World, Johannes Kepler announced his Third Law of Planetary Motion on May 15, 1618. A decade before, Galileo Galilee had devised the first astronomical telescope and made revolutionary discoveries.

1623 – For the October 23 total solar eclipse, we are back in South Carolina with the Cherokee Nation. The ship Anne arrives from England at "New Plymouth" (Plymouth Colony), carrying more settlers, followed a week or two later by the Little James. One of the first treaties between colonists and Native Americans is signed in 1621 as the Plymouth Pilgrims enacted a peace pact with the Wampanoag Tribe, with the aid of Squanto, an English speaking Native American.

1679 – We join the Cheyenne Nation in what is now Wyoming. Although some settlers had founded Duluth, Minnesota by this time, before 1776, the West was of high priority for settlers and politicians and was essentially any part of the interior of the continent beyond the fringe of existing settlements along the Atlantic coast. These regions of the continent were still reserved for explorers and trappers, who traveled through Cheyenne territory very carefully and usually unwelcomed.

1724 – The second eclipse to pass through Wyoming arrived on May 22 of this year. The historic Indians in Wyoming were nomadic tribes known as the Plains Indians. They were the Arapaho, Arikara, Bannock, Blackfeet, Cheyenne, Crow, Gros Ventre, Kiowa, Nez Perce, Sheep Eater, Sioux, Shoshone and Ute tribes. Of all of these tribes, the Cheyenne and Sioux were the last of the Indians to be controlled and placed on reservations. By 1742 Francois Louis Verendyne entered Wyoming, discovered Big Horn Mountains

1778 – We are again in South Carolina with the Creek and Catawba tribes. The first major movement west of the Appalachian Mountains originated in Pennsylvania, Virginia and North Carolina as soon as the war ended in 1781. Pioneers lived in a rough lean-to or at most a one-room log cabin. They hunted deer, turkeys, and other abundant game wearing typical frontier garb: leather breeches, moccasins, fur cap, and hunting shirt, and girded by a belt from which hung a hunting knife and a shot pouch. After winning the Revolutionary War (1783), American settlers in large numbers poured into the west. In 1788, American pioneers to the Northwest Territory established Marietta, Ohio as the first permanent American settlement in the Northwest Territory. In 1775, Daniel Boone blazed a trail for the Transylvania Company from Virginia through the Cumberland Gap into central Kentucky. In the Stamp Act Crisis of 1765, South Carolina banded together with the other colonies to oppose British taxation and played a major role in resisting Britain. It became independent in March 1776 and joined the United States of America. 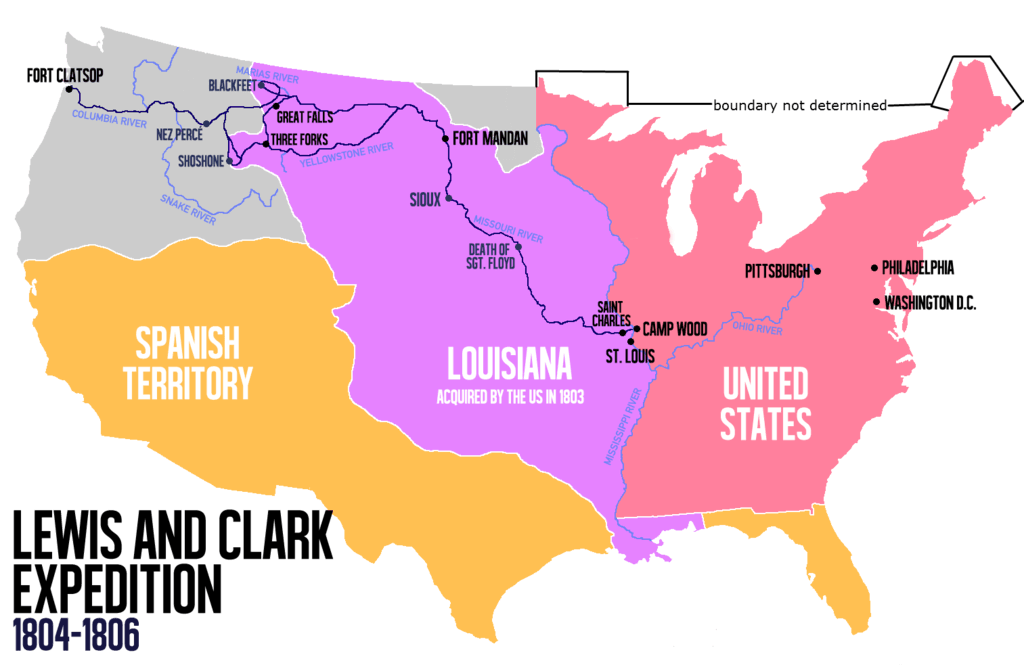 1806 – Finds us in the Missouria Nation, in a region that eventually becomes the state of Missouri. By July 15, near St. Louis, Missouri, United States Army Lieutenant Zebulon Pike leads the Pike Expedition from Fort Bellefontaine to explore the west. This is followed on September 23 by the Lewis and Clark Expedition reaching St. Louis, Missouri, ending a successful exploration of the Louisiana Territory and the Pacific Northwest. A few years later, the War of 1812 marks the final confrontation between major Indian forces trying to stop the advance, with British aid. The British war goal included the creation of an independent Indian state (under British auspices) in the Midwest. By 1800, the western frontier had reached the Mississippi River. St. Louis, Missouri was the largest town on the frontier, the gateway for travel westward, and a principal trading center for Mississippi River traffic and inland commerce. President Jefferson's Louisiana Purchase of 1803 doubled the size of the nation at the cost of $15 million. The population of Upper Louisiana was primarily concentrated in a few settlements along the Mississippi in present-day Missouri. Travel between towns was by the river. Subsistence agriculture was the primary economic activity, although most farmers also raised livestock. Fur trading, lead mining, and salt making were also significant economic activities for residents during the 1790s. The land south of the thirty-third parallel, then known as the Territory of Orleans, became the state of Louisiana in 1812, and the Louisiana Territory was renamed the Missouri Territory. That year, the territory was raised in status and its inhabitants were granted legislative rights for the first time

1834 – We are now back in Wyoming with the Cheyenne Nation to watch the November 30 total solar eclipse. Artist George Catlin (1796–1872) traveled up the Missouri as far as North Dakota, producing accurate paintings of Native American culture. Helping settlers move westward were the emigrant "guide books" of the 1840s featuring route information supplied by the fur traders and the Frémont expeditions, and promising fertile farm land beyond the Rockies. With more emigrants from the East passing through these regions headed westward, more encounters with Native Americans were inevitable. Military posts such as Fort Laramie were established to maintain order in the area. In 1851, the first Treaty of Fort Laramie was signed between the United States and representatives of Native American nations to ensure peace and the safety of settlers on the trails.

1878 – The July 28 eclipse again finds us in the Shoshone Nation in what is now Wyoming, but by now the fragile peace between the Native Americans and Westerners had dissolved into warfare. As encounters between settlers and Indians grew more serious in 1865, Major General Grenville M. Dodge ordered the first Powder River Expedition to attempt to quell the violence. The expedition ended in a battle against the Arapaho in the Battle of the Tongue River. The next year the fighting escalated into Red Cloud's War which was the first major military conflict between the United States and the Wyoming Indian tribes. The second Treaty of Fort Laramie in 1868 ended the war by closing the Powder River Country to whites. Violation of this treaty by miners in the Black Hills lead to the Black Hills War in 1876, which was fought mainly along the border of Wyoming and Montana. Meanwhile, The Union Pacific Railroad played a central role in the settlement of Wyoming. The land was good for cattle ranches, but without transportation it was too far for a cattle drive. The UP reached the town of Cheyenne, which later became the state capital, in 1867. The railroad eventually spanned the entire state, boosting the population, and creating some of Wyoming's largest cities, such as Laramie, Rock Springs and Evanston. After the arrival of the railroad, the population began to grow steadily in the Wyoming Territory, which was established on July 25, 1868.

1889 – This eclipse finds us in Idaho. During this time, the region was part of an unorganized territory known as Oregon Country, claimed by both the United States and Great Britain. In 1853, areas north of the 46th Parallel became Washington Territory, splitting what is now Idaho in two. The first of several gold rushes in Idaho began in 1860 at Pierce in present-day Clearwater County. The original Idaho Territory included most of the areas that later became the states of Idaho, Montana and Wyoming, and had a population of under 17,000. Idaho Territory assumed the boundaries of the modern state in 1868 and was admitted as a state on July 3, 1890. 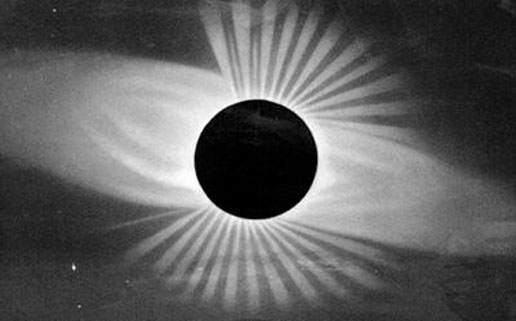 1900 – The May 28 total solar eclipse finds us, again, in South Carolina. The Paris World Exhibition opens, and the Boxer Rebellion in China begins. The Hoboken Docks fire in New York City spreads to German passenger ships Saale, Main, and Bremen. The fire engulfs the adjacent piers and nearby ships, killing 326 people. Meanwhile, American temperance agitator Carrie Nation begins her crusade to demolish saloons. In another major disaster of this year, the Galveston hurricane kills about 8,000 people. 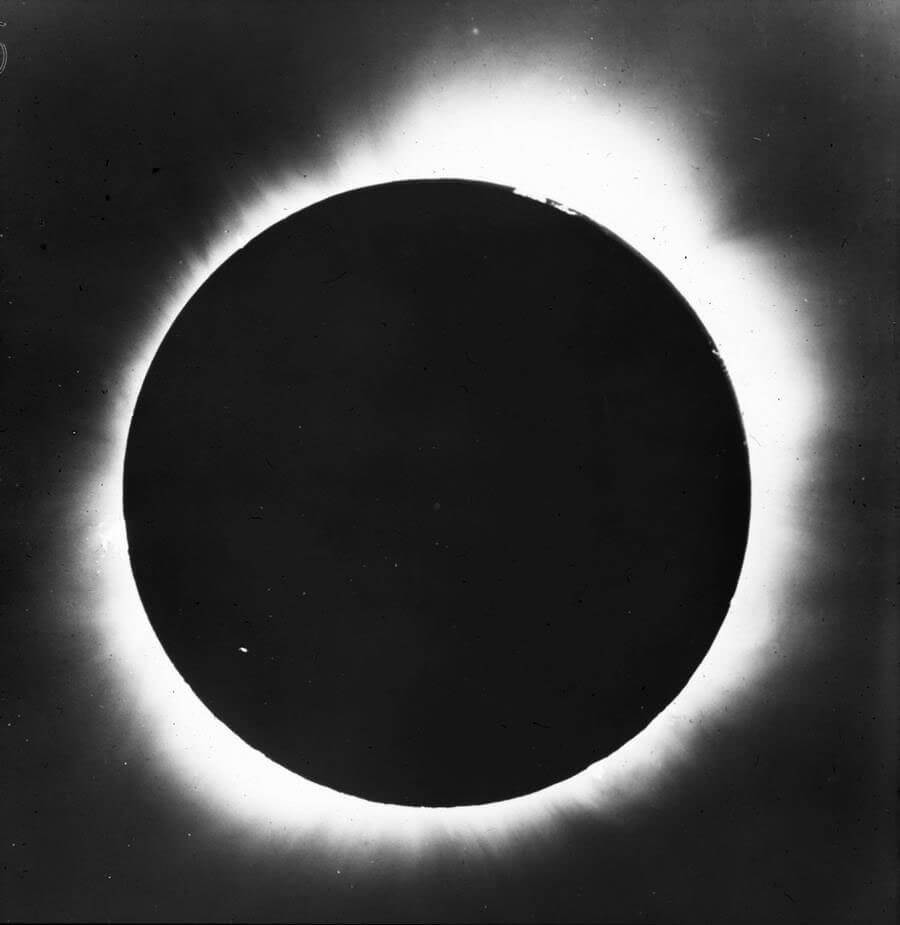 1918 – We are back in Oregon to view this eclipse on June 8. Between June and August, the world is still struggling through the horrific World War I, when the "Spanish 'flu" becomes pandemic. Over 30 million people die in the following 6 months. During the Battle of Amiens, Canadian and Australian troops begin a string of almost continuous victories, the 'Hundred Days Offensive', with an 8-mile push through the German front lines, taking 12,000 prisoners. This is one of the final major battles of World War I.

1970 – The March 7 total solar eclipse in South Carolina becomes the last total solar eclipse to be viewed in the continental United States until 47 years later in 2017. The first Earth Day is celebrated on April 22, and the Apollo 13 mission returns safely to Earth following a harrowing flight.