Measuring the Dimming of the Daylight

Another way to become more involved with a total solar eclipse is to create ways to measure it. When the sun is covered by the moon, things get dark outside. This little experiment using an iPhone App or your digital camera lets you measure the dimming with a photographic light meter.

There are as many way to measure an eclipse as there are ways to describe your environment by position, time, temperature, light and other factors. Here we discuss how to measure the most dramatic dimming of light caused by an eclipse of the sun.

How do we measure sunlight brightness? You need a light meter!

Eye Charts! – Yes, you can use a Reading Chart to estimate sky brightness because as the ambient light dims your visual acuity will decrease from the standard 20/20 to more ‘impaired’ levels. It starts out at 3 point font, which should be readable before totality begins, and grows to 36 point font, which should be just visible during totality. Graph the font size you can read at various times before, during and after the eclipse to indirectly gauge the ambient light level. Prof. Patricia Reiff at Rice University has a method for using Reading Charts in this way.

A digital camera. All modern cameras have a digital light meter built into them to help the camera set the proper exposure time and f/stop for the photograph. You can use this light meter as a proxy for measuring the brightness of your environment. Just get a white sheet of paper and point your camera lens at it, or point your camera at some scenery that will stay the same through the two hours of the eclipse. When you press gently on the exposure button, it will make a sensor measurement of the brightness of the sheet, and in many cameras it will display the required exposure speed. Note this exposure speed and the time of the measurement. Then plot the time on the horizontal axis and the exposure speed on the vertical axis with the exposure speed running from slowest (1/2 second) at the bottom to the fastest (1/100 second) at the top. The fastest speed means the brightest daytime illumination.

Some cameras let you adjust the film speed. If you have one of these ,set the speed near 1000 ASA so that the camera will respond to the lowest light levels you are likely to see under twilight conditions.

To test your set up, in the days before the eclipse go outside during sunset and twilight and make some measurements to see how well your camera and settings perform. During total solar eclipse conditions, the light levels will resemble twilight conditions about 30 minutes after sunset. 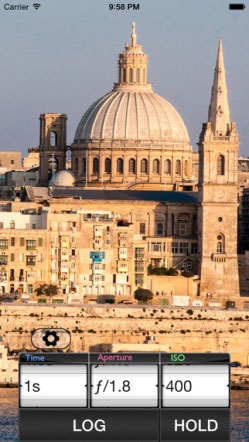 IPhone and Tablet Apps – here are light meter apps available for iPhones and Tablets that use the build-in camera to display a measure of the illumination level. The Pocket Light Meter and the myLightMeter Free provide accurate measurements of illuminance in the standard photographer’s language of f/stop, ASA and exposure speed. These devices, once again, are inexpensive, but provide an indirect measure of brightness in terms of exposure speed at a given F/ and ASA.

Digital Light Meters – These are more sophisticated devices retailing for between $20 and $150 that directly measure the amount of light falling on their sensors in physical units of illuminance such as Foot-Candles or Lux. Although NASA can’t mention any specific models, these metering technologies will provide you with the most direct measurement of light levels that are scientifically useful.

If you use a camera light meter, you will need to calibrate it against a light source with a known brightness if you want to convert the exposure/f/ASA combinations into physical units such as candlepower and Lux. One way to do this is by using reading lamps of different wattages with their light shining on a white sheet of paper. Point the camera at the same fixed distance from the illuminated paper and measure the exposure/f-stop/ASA combinations you will use during the eclipse. Also use the inverse-square law to obtain intermediate illumination values from each light bulb.

The Dark Sky Association provides light meters as part of its light pollution program. These meters and their protocols are a perfect way to measure the eclipse! Their Dark Sky meter app, helps you measure the night sky brightness with the press of a button. Get instant information about the night sky quality and contribute to create a global map of sky darkness. See their Measuring Light Pollution page for more information on how to use this app.

Participating in the Globe at Night citizen-science campaign is a great way to help our understanding of sky glow and its impact. No special tools are required, and observations can easily be reported by smartphone, tablet or computer. The Dark Sky Meter app makes use of the iPhone camera to record the brightness of the night sky. Their MySkyatNight project also lets you do your own analysis of all this available data. 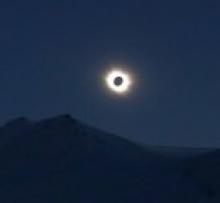