Smartphone Photography of the Eclipse

Most of the ‘beauty shots’ you will see related to this eclipse will be taken with professional digital cameras on tripods, or shot through a telescope, but the most common photos you will probably see will be taken by the millions of smartphones used by ordinary people to capture this event. These will generally not look very good with the typical smartphone system, but with a bit of preparation, you will be able to create some stunning pictures! Here are some general guidelines for taking successful smartphone images, followed by some detailed suggestions for inexpensive equipment you will need to really see some impressive details. 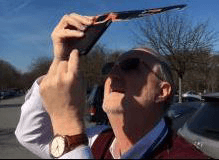