When sunlight fades at twilight, we always notice how things start to cool down. The same is true for the temporary dimming during a total solar eclipse. Why not use a thermometer to measure it? 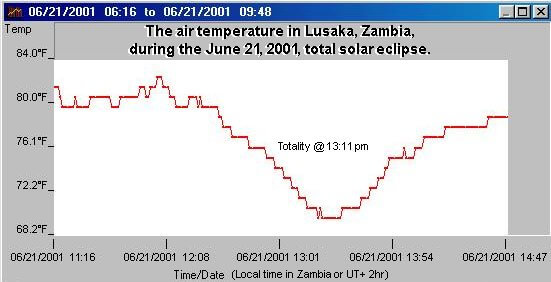 The Moon's shadow is cool, literally! When it swept by Lusaka, Zambia, on June 21st in 2001 the air temperature dropped nearly 15 degrees F. This graph shows a series of measurements made by NASA astronomer Mitzi Adams during the total solar eclipse using a Thermochron Temperature Logger.

How to do it - In the hour before the eclipse, make several measurements of the temperature in data groups about 5 minutes in length, then average together the measurements within each group. Note the time at the midpoint of each group. Make these measurements groups regularly as the eclipse approaches, as it is happening, and during the hour after it has ended. Graph the results in terms of the time from the midpoint of the eclipse when the sun is completely eclipsed. You may need to experiment before the eclipse to find the best time interval for your measurements. This will depend on the technology you select. Some thermometers take many minutes to register an air temperature so you need to at least give the thermometer system enough time to register a ‘stable’ temperature. This is a significant problem worth discussing in a bit more detail!

A significant problem you may encounter is that making ambient air temperature measurements during a rapidly-changing phenomenon. During totality, the time from full daylight to darkness and back again is only about 2 – 3 minutes. This may be too quick a change for your thermometer to measure it! The best thing to do is to experiment with your thermometer to see how quickly it registers an air temperature change. One way to do this on a warm day is to measure your indoor air temperature, then carry the thermometer outside and measure how long it takes for it to finally make a stable reading on the outdoor temperature. For air temperature, some thermometers, such as an ordinary analog mercury thermometer, may take several minutes to do this. Other digital thermometers, normally designed for medical or liquid measurements, may take a much longer time. Ideally, since the temperature change during totality may only be ten degrees or so, you need a thermometer or sensor system that can register an air-based ten-degree change in a matter of a minute or so, and to do this reliably.

Scientists spend a lot of time getting to know their instruments, their accuracy and precision, and noise characteristics before using them under actual research conditions. In many cases, they actually design their instruments right from the start to overcome many of the limitations that stand in the way of making the measurement they want. Likewise, if you want to make measurements of temperature changes during an eclipse, you need to select the best equipment to do this and get to know its limitations.

IPhone and iPad App Be careful. Some Apps do not make a measurement of your local temperature, but go off and consult a weather service to give you an average hourly temperature! What you want is an app that makes an actual measurement in real-time. Also, for accurate readings, you need an App that uses an external temperature sensor, not one built-in to the very hot iPhone body. 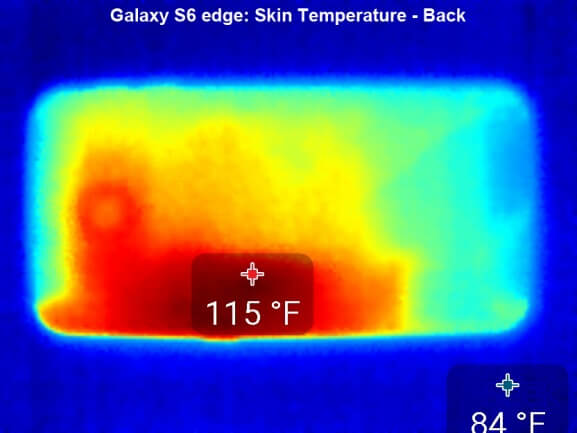 Internal heat sensor - Although they were well for monitoring whether your smartphone is over-heating, they cannot be used to reliably measure environmental temperature except under certain circumstances. For instance, if you use one of the apps to make a measurement immediately after you start the phone, and the phone has been unused and powered down for several hours before, the smartphone may give a reasonable estimate for the current, ambient temperature. Here is an infrared image of a smartphone, which shows the kinds of thermal backgrounds an internal sensor has to cope with in order to make an environmental measurement!

External heat sensor - These sensors are plugged into the audio jack of the smartphone and often attached to a cable. Measurements are more accurate for low-temperature measurements below room temperature. Once again, it is an encapsulated, thermistor-based design that allows the sensor to be far from a local source of heat, and so is capable of making accurate environmental measurements.

Measuring issues - The internal-sensor-based smartphones can be placed in contact with other solid objects whose temperature you want to measure. A finite time must pass in order for the smartphone to reach, at least approximately, the temperature of the tested solid. For measuring local atmospheric conditions, a longer time will be required because of the less-efficient thermal conductivity of air. Also, the smartphone needs to be out of direct sunlight to avoid solar heating. External sensor systems have probes that can usually be dipped into liquids if covered with a plastic sandwich bag. As described below, these systems have a very rapid and repeatable response to temperature changes, however they also require an equilibrium time in order to reach the same temperature as the test object. This will, again, be longer for gas measurements than for solid or liquid measurements. 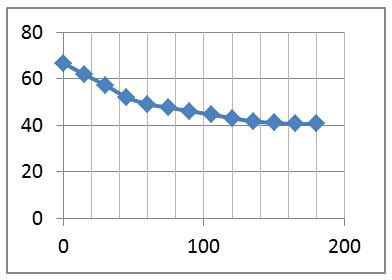 Analog Mercury Thermometer - This is an Old School technology, but it is a reliable way to measure temperature. Any standard weather thermometer will be designed properly to record air temperature changes over the likely 10 – 15 F range. The big question is whether these thermometers can detect a ten-degree change in air temperature in only a minute or so!

Research Suggestions - If you are using a ‘weather station’ set-up, why not keep track of the air pressure and wind speed too? Compare your results with a partner’s results in another neighborhood, or in another town if you have relatives located along the path of totality! Why might some locations give more of a temperature change than others? What would you predict the changes would be in different locations? Does the presence of a local body of water, or roadway asphalt, make a difference? Does the local temperature at the start of the eclipse make a difference to how low the temperature falls?

Would like to contribute your data to a database used by students and scientists to study the effects of the eclipse on the atmosphere? General citizen scientists can observe and report clouds and air temperature with GLOBE Observer, while those interested in pursuing additional online training (especially formal and informal educators) are encouraged to check out other data collection and research ideas from the full GLOBE Program. After the eclipse, you can use the GLOBE Visualization System to check out the data collected by you and your fellow citizen scientists, and to help you answer your own scientific questions.