What’s Up? Eclipses, Transits, and Occultations

Solar eclipses are exciting events. The idea that the moon can move in front of the sun and block its life giving light, causing darkness to fall is both compelling and maybe a little scary. The moon can block other celestial objects. In 2017, the moon will move in front of a star in one of the 88 constellations, 88 times; this includes really bright, 1st magnitude stars like Alpha Leo (Regulus) and Alpha Taurus (Aldebaran). In fact, during the August 21, 2017 eclipse, the moon will pass very close to Regulus. When an apparently big object moves in front of an apparently small object, astronomers call that an “occultation”.

The moon also occults planets. Since the moon and planets follow very nearly the same path across the sky, called the “ecliptic”, the moon on occasion moves in front of (occults) one of the planets. In 2017, the moon occults Mars once and Neptune six times! 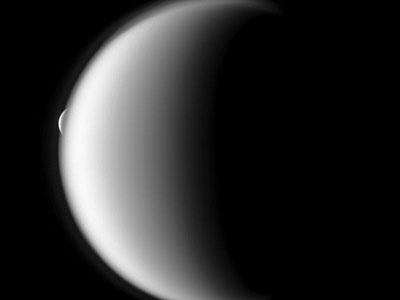 On rare occasions, an inner planet (Mercury or Venus) will move in front of the sun as we see it from Earth. When an apparently small celestial object (like a planet) moves in front of an apparently big one (like the sun), astronomers say that a “transit” has occurred. Transits of Mercury happen around 10 times in a century. The next one will occur on November 11, 2019. Transits of Venus happen twice every 105 or 121.5 years, separated by eight years. The last two of these occurred in 2004 and 2012. The next Venus transit won’t happen until 2117! 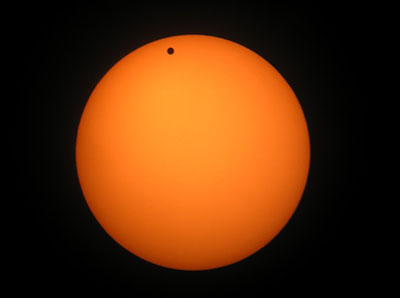 Transits are very important for another reason – They help us identify other planetary systems! There are six primary strategies astronomers use to find planets orbiting other stars. These include astrometric, radial velocity, spectroscopic, direct imaging, microlensing, and transit detection methods. By far, transit detections have been responsible for discovering most of the extrasolar planets we know about today. Here, astronomers look for the periodic dimming of a star’s light as one of its planets moves in front of it. This, of course, requires that the planet orbits the star in our plane of view. It also favors large planets orbiting close to their stars. Still, as of May 18, 2017 there were 3,488 confirmed exoplanets orbiting other stars, and 78% of them were discovered by the transit detection method. 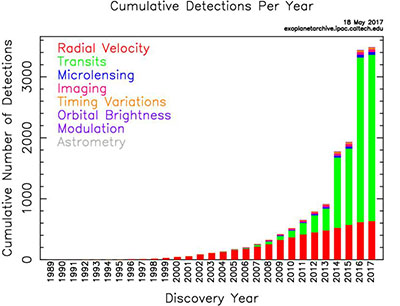